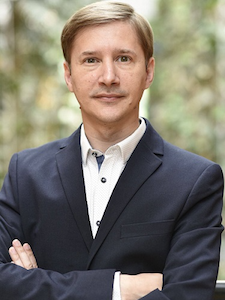 Cristian Bulumac is policy advisor in the European Parliament for the Greens/EFA group, covering telecommunications and space topics in the ITRE and IMCO committees. After a career in the central level of the Romanian public administration, he joined the debates on internet governance in the European Parliament.  Since 2012 he is part of the teams that drafted and negotiated the European rules on net neutrality, roaming, platforms and content regulation, consumer rights and the funding for infrastructure, research and skills in the digital domain. Cristian holds degrees in law and systems engineering and has previously practised as a legal advisor for the public sector.