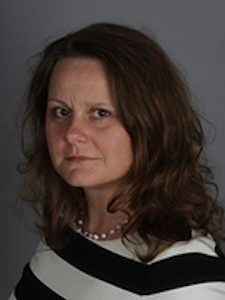 Sandra Hoferichter is the Secretary General of the European Dialogue on Internet Governance (EuroDIG), the European IGF.

She became involved in Internet governance processes in 2006 by managing projects - such as the European Summer School on Internet Governance (EuroSSIG)- for Medienstadt Leipzig e.V., a German not for profit organization.

In 2010 Sandra was elected as one out of three European representatives to ICANN’s At Large Advisory Committee(ALAC), where she served until November 2016 and later on represented the ALAC at ICANN’s Nominating Committee (NomCom) from 2016 - 2018.

Sandra's contributions, both to the ICANN community and the efforts within the IGF fora, are dedicated to facilitate a collaboration ground for different stakeholder groups and to develop participation processes that are public, inclusive and transparent.

In 2017 she was appointed to EURid's Strategic Committee and is, since May 2018, Vice Chair of the Board of Directors of EURid - the registry for the .eu domain.

Sandra holds a degree in Architecture from the Leipzig University of Applied Sciences (HTWK) and worked as a single entrepreneur architect from 1997 – 2011.