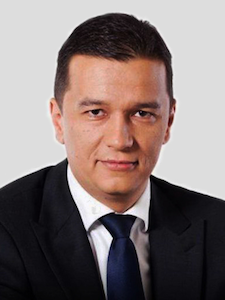 Sorin Grindeanu was appointed President of the National Authority for Management and Regulation in Communications of Romania in November 2017. Between January and June 2017, he served as Prime Minister of Romania. From 2012 to 2016, he was an MP and a member of the IT&C Committee in the Chamber of Deputies. He served as Communications Minister from December 2014 to November 2015.

Mr Grindeanu also has extensive experience in the local administration: he was President of the Timiș County Council from June 2016 to December 2017, and before that, he served as a vice mayor of Timișoara City, a member of the Timișoara local council and Head of the Timiș County Youth and Sports Directorate. Sorin Grideanu is a graduate of the West University of Timișoara - Faculty of Mathematics, majoring in IT, and holds a Master’s Degree in Data Bases.