Issue no. 45 of the SEEsummary, published on 1 March 2021, by SEEDIG. This issue covers Internet governance and digital policy developments that occurred in South Eastern Europe and the neighbouring area (SEE+) in February 2021. Also included: a list of upcoming events in March. 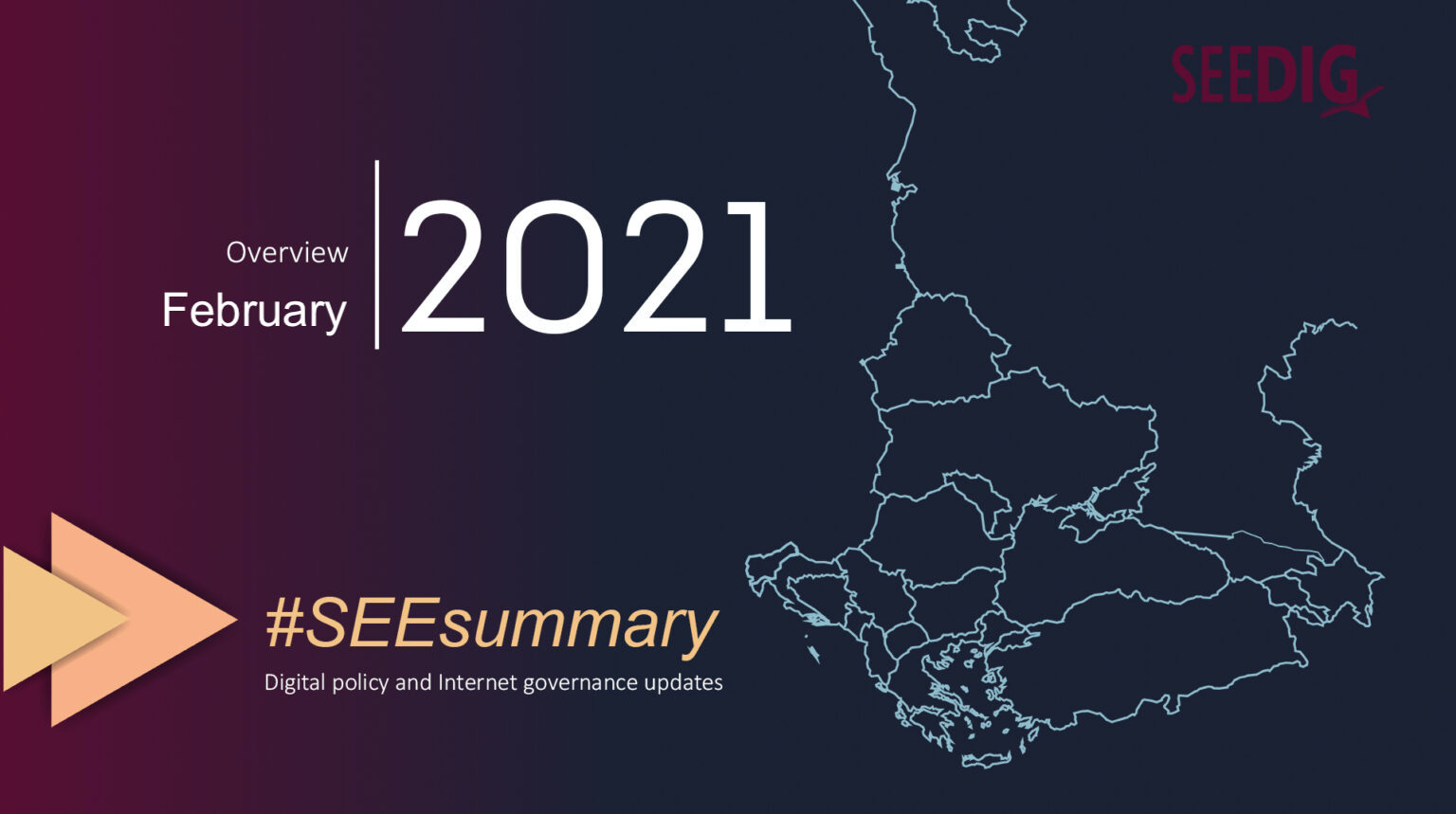 The European Commission opened infringement procedures against 24 member states, including Bulgaria, Croatia, Cyprus, Romania and Slovenia, for a failure to enact the new European Electronic Communications Code into national legislation by 21 December 2020. The Commission sent formal letters requesting these countries to adopt the Code and notify of the relevant measures within the next two months. For reference, the European Electronic Communications Code, which aims to update the European telecom sector’s regulatory framework according to the digital age challenges, came into force in December 2018, and countries had two years to prepare for its implementation. So far, only Greece, Hungary and Finland completed the transposition.

Under the EU Recovery Fund’s financial support, the Ministry of Digital Government of Greece intends to launch a WiFi4GR project and install 5600 wireless Internet access points in 2500 areas across the country. The project will involve three contractors in charge of both installing and operating the Wi-Fi infrastructure for at least three years. The local municipalities will identify access areas, including event spaces, waiting zones, points of tourist and cultural interest. The tender for interested contractors is open until 26 March 2021.

The Ministry of Digital Transformation of Ukraine opened procurement procedures for broadband deployment under its new national expansion programme to cover additional 2300 settlements in 19 regions across the country with high-speed fixed Internet services. With this initiative, the authorities will connect around 430 000 households and rural social infrastructure institutions to the high-speed Internet. One of the companies that submitted its bid is Ukraine’s telecom provider Ukrtelecom that already covers 3322 settlements all over Ukraine with broadband network services.

The European Commission approved over EUR 86 million investment to develop next generation broadband infrastructure in Croatia. This investment will enable access to high-speed Internet services in rural and suburban areas. It will also improve business growth and expand e-services and digital education systems. The planned developments correspond to the EU broadband strategy and policies.

Russian parliament adopted a bill authorising the blocking of mobile services in prisons and pre-trial detention facilities. It is allegedly aimed at combatting scam calls mostly coming from such facilities and targeting elderly people, as well as avoiding pressure on witnesses, and coordinating illegal activity. According to statistical data, every fourth crime is committed using information technology. Further, the authorities plan to criminalise the recurrent illegal delivery of cell phones into the penitentiary facilities.

terrorist propaganda. The Turkish government’s crackdown on social media users intensified with adopting a new law in 2020, allowing security forces to detain anyone responsible for posts suspected of being linked to terrorist organisations or spreading disinformation. As part of the new law, social media platforms are required to appoint legal representatives in the country to answer the government’s demands to delete social media posts and accounts. YouTube, Facebook, Instagram, TikTok and Russian VK already complied with the requirement.

According to Balkan Investigative Reporting Network (BIRN) research, almost half of reports in Bosnian, Serbian, Montenegrin or Macedonian language to Facebook and Twitter are about hate speech, with every second post reported as hate speech remaining online. Social networks remove only 60 percent of posts reported as threatening violence, and 50 percent marked as targeted harassment. Content moderation challenges in Western Balkans result from the lack of transparency on how social media companies assess complaints and insufficient language sensitivity to distinguish harsh criticism from defamation or radical political opinions from expressions of hatred and racism or incitement to violence.

Twitter disclosed and removed 373 accounts reportedly having ties with Armenia, Iran and Russia, and breaching the platform’s manipulation policies. The social network took down 35 accounts associated with the government of Armenia and targeting Azerbaijan. Twitter also removed two networks with ties to Russia that included 100 accounts and amplified narratives undermining NATO’s role and targeting the United States and the European Union.

Coordination Center for TLD .RU/.РФ and RIPN agree to cooperate on countering abuse

In Russia, the Coordination Center for TLD .RU/.РФ and the Russian Research Institute for the Development of Public Networks (RIPN) signed a memorandum of cooperation to enhance partnership on issues related to countering the spread of abuse, such as spam, phishing, child pornography, and botnets. The document envisages exchange of experience and information on countering abuse, establishing joint working groups, and providing consultative assistance, including efforts to involve other Russian-based registries in abuse-countering activities.

Armenia announced its plans to establish a National Cybersecurity Centre of Excellence as part of its 5-year Armenia’s Digitalisation Strategy. The Centre will serve as the cybersecurity guarantor of state systems, ensuring data protection and enhancing digital literacy. The Digitalisation Strategy aims at running all state services electronically, including document circulation, electronic signatures provision, access to the services from abroad, etc. Moreover, access to a high-quality Internet connection and electronic state services in the municipal and rural areas will rise from 40 to 80 percent by 2025. Finally, all state official websites and electronic systems will become accessible for people with disabilities.

On 22 February 2021, Spotify, a Swedish audio streaming and media services provider, notified the Commissioner for Information of Public Importance and Personal Data Protection of Serbia of its decision to appoint the law firm Karanović & Partners as its data protection representative. Once again, the Commissioner invited foreign companies to comply with the Data Protection Law and appoint representatives in the country. You can find more information about international companies’ compliance with the Serbian Data Protection Law in the previous issues of the SEEsummary.

On 17 February, the Russian parliament adopted the digital currencies’ bill in the first reading. The bill introduces amendments to the Tax Code and stipulates an obligation of the Russian citizens, foreigners with a resident permit, permanent residents and all legal entities (including international companies’ branches) disposing of digital currencies to inform national authorities about such assets and any generated income exceeding 600 000 Russian rubles (approximately EUR 6600) per year. Non-compliance will lead to fines. The law passed in the first reading, and amendments can be submitted until 18 March 2021. Reportedly, industry experts criticised the draft law with one of the concerns related to the absence of digital currency definition in the Russian Civil Code. The parliament is allegedly planning to consider respective amendments to the Civil Code in the second reading.

The parliament of Moldova voted for a 40 percent decrease (from 2,5 percent to 1,5 percent) of the so-called mobile operators’ ‘luxury’ tax starting from 2022. Authorities introduced the tax back in 2000 in an attempt to levy high-income citizens that could afford to own a mobile phone, considered then as a luxury. By now, when every citizen of Moldova owns a mobile phone, the tax is paid by everyone and becomes redundant. It also artificially increases the price of mobile services. The money from this tax is accumulated in the Republican Fund of Population Social Support.

The 13th information technologies international olympiad ‘IT-Planet 2020/21’ announced its call for applications. The participants will be asked to solve case studies, develop or integrate online solutions to various economic, design, programming issues. This year the Olympiad will take place on Braim, a platform for innovative competitions that connects students, developers and startups with leading brands. Interested candidates between 16 and 27 years old are invited to submit applications by 31 March 2021.

RIPE 82 Programme Committee invites content proposals from the RIPE community for the plenary sessions, lightning talks and BoFs. Presentation proposals should focus on themes related to network engineering and operations. More details about requirements and session formats of the event can be found in the call. Proposals must be submitted using the meeting submission system by 19 March 2021.

State of DNS Abuse; Trends from the last three years and current landscape