Issue no. 49 of the SEEsummary, published on 3 July 2021, by SEEDIG. This issue covers Internet governance and digital policy developments that occurred in South Eastern Europe and the neighbouring area (SEE+) in June 2021. Also included: a list of upcoming events in July and August. 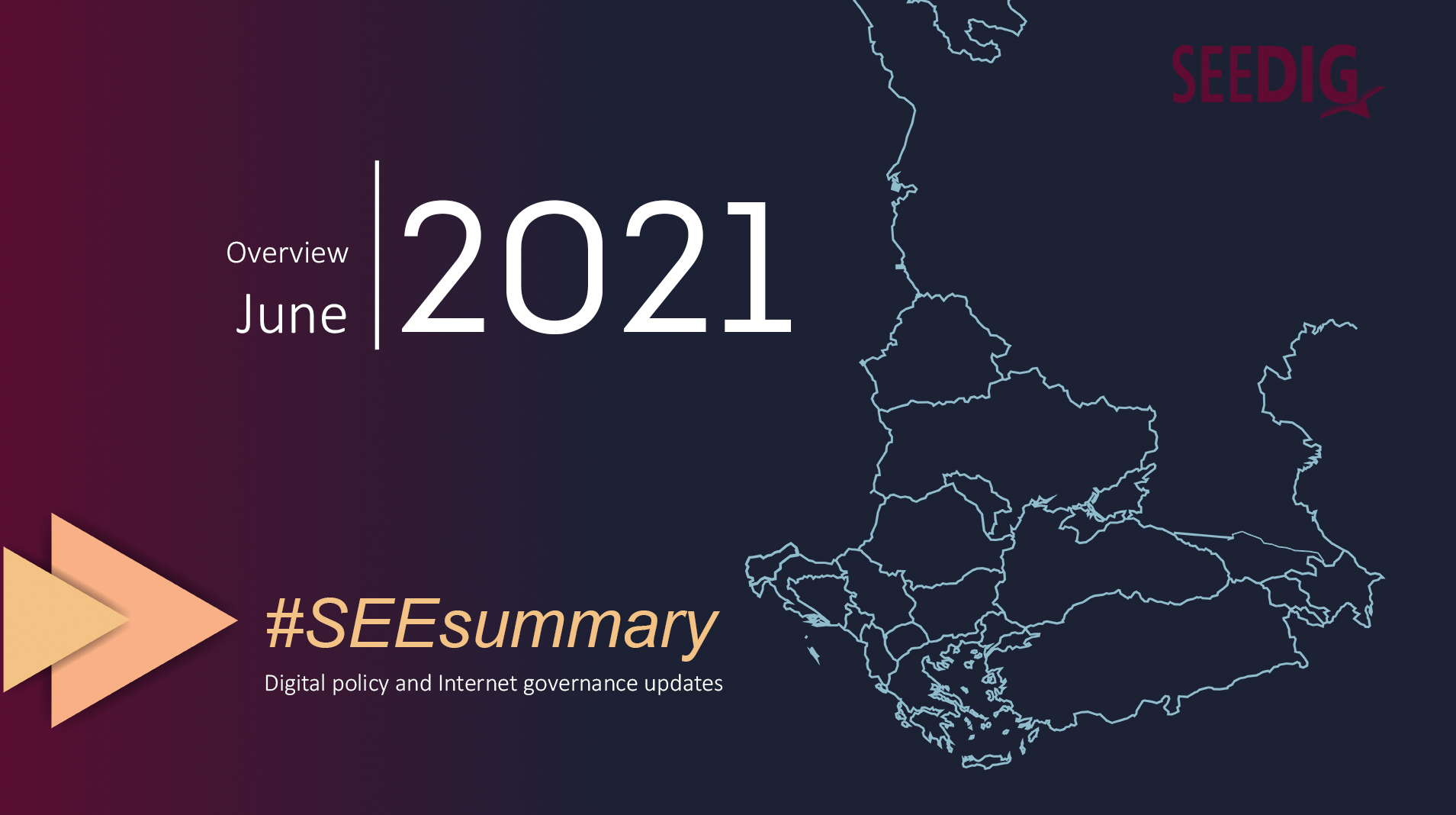 In June, Greek mobile network operator Cosmote reported a 50 percent population coverage with its 5G network deployed in 29 cities and islands. The target was initially set up for the end of the year (check issue no. 46 of the SEEsummary). Still, the company managed to facilitate the rollout and now aims at another 10 percent by December 2021.

In the meantime, Belarusian national infrastructure operator, beCloud, announced phasing to the second stage of the 5G testing that will last until the end of 2021. Afterwards, the company plans a commercial launch of the 5G technology. The first testing phase took place between May and December 2020 and covered Minsk and Gomel cities, while the second phase will be run in a broader area to ensure the operation of remotely controlled vehicles.

In Russia, telecom operators MegaFon, Vimpelcom (Beeline) and Rostelecom, upon approval of the Federal Antimonopoly Service, signed a joint venture agreement on collaboration in developing radio frequencies for setting up the national 5G network. The essential condition of the deal is non-discriminatory access to radio frequencies for all market players.

Finally, in Romania, the parliament adopted a 5G law currently pending the president’s signature. The law specifies the authorisation procedure for the manufacturers of technologies, equipment, and software used in information and communication infrastructures of national importance and in 5G networks to prevent and eliminate risks to national security and ensure transparency of 5G providers. The law might lead to the exclusion of Chinese Huawei from manufacturing the equipment. Romania initially planned to start the 5G auction proceedings in 2021 but might postpone the launch till the last quarter of 2022.

Within the project “Norway for you – Serbia”, Norway donated Serbia the Cyber ​​Range platform, which is designed to develop the skills necessary for cyber-attack detection and recovery. In June, representatives of key national information security institutions participated in the first national cyber exercise and practised defence against Keylogger malware that records everything a user types on a keyboard. The defence from such attacks is vital since the most frequent attacks in Serbia in 2020 included phishing, ransomware, trojans and other similar malware. Exercising in a hyper-realistic cyber-attack simulation allows the participants to improve their skills before the actual attack occurs.

The European Union and Ukraine conducted the first cyber dialogue. Both parties are officially committed to a global, stable and protected cyberspace, where the rule of law is fully respected, the human rights are defended online, and the security, economic growth, prosperity, and integrity of open and democratic societies are supported and preserved. The EU and Ukraine reiterated the significance of the Budapest Convention on Cybercrime. They also provided updates on the institutional settings, responsibilities, policy and legislative developments related to cyberspace, including the update on the EU Network Information Security (NIS) Directive and the efforts by Ukraine to develop respective national policies and legislation in alignment with the EU standards. Furthermore, the meeting addressed the digital transformation and capacity building activities contributing to cyber resilience and preventing cybercrime in Ukraine and globally.

Following the public administration digitalisation vector, the Office for IT and eGovernment of Serbia launched a new platform, “Smart Serbia”, to serve as a single place for secure data storage and processing. The platform integrates all information flows from various state bodies at the local and national levels. It provides the government authorities and external partners with an opportunity to create and implement innovative scenarios for data collection, analysis and visualisation, deliver better e-services to the citizens and develop artificial intelligence solutions.

For the first time, surgeons in Ukraine used virtual technology to fight a congenital heart disease of a 12 years old girl. By reconstructing the girl’s aorta with VR technology, doctors developed and inserted an artificial tube to heal the girl’s circulatory system. Virtual reality can be used in various ways in medicine. However, medical institutions in the country are reluctant to apply new technologies due to a lack of solid research.

In June, the EU4Digital Facility presented a virtual warehouse, an eCommerce pilot solution for the cross-border automated electronic exchange of data. The eCommerce pilot allows small and medium-sized enterprises (SMEs) from Armenia, Azerbaijan, and Georgia to place their goods for sale in Germany. Once the purchase occurs, respective transaction data are automatically exchanged between retailers, marketplaces, delivery operators and customs. Implementing countries stressed the importance of the initiative for the development of cross-border eCommerce in smaller markets. The pilot activity will be followed by recommendations from the EU4Digital Facility focused on the rollout and scaling up of the virtual warehouse solution.

Startups in North Macedonia get investment for digitalisation of agriculture

The North Macedonian Fund for Innovation and Technological Development provided financial support to four startup companies under the first Agricultural Digitisation Challenge supported by the Ministry of Agriculture, Forestry and Water Economy and the Swiss Agency for Development and Cooperation. The awardees will implement projects aimed at transforming the agricultural sector and improving its efficiency and sustainability. In particular, they will create a digital agricultural multilingual platform and mobile application, establish the centre for digital agriculture, design the milk reservoirs’ controller, and construct a drone for monitoring, measurement, and analysis. All four startups offer innovative solutions that will increase productivity and farmers’ incomes. The total allocated budget equals six million denars (approx. EUR 16 197).

E-sports federations from Bosnia and Herzegovina, North Macedonia and Montenegro founded the regional Adria Esports Federation aimed at improving e-sports infrastructure and ecosystem, creating better opportunities for the gamers and contributing to the economic development of the region. Slovenia, Croatia, Serbia, Kosovo and Albania are expected to join the new regional initiative during the summer. The founders stated that e-sports have greater resistance to external factors than classic sports. They also reiterated their commitment to mental health recommendations that are currently elaborated by the International Esports Federation.

Amazon, Facebook, Apple and Netflix, that provide services without opening physical offices in the country. According to the new law, foreign tech companies not registered in Ukraine will pay a 20 percent value-added tax for digital services they provide to local users. The bill targets content like foreign TV channels, games, electronic books, images and photos. Among other services are the supply of software, data storage, gambling and online advertising. At the same time, remote education online platforms and companies that deliver digital services through their permanent offices in Ukraine are exempt from the tax. There are some expert opinions that the tax burden might eventually move to users who will have to pay a higher price for the services.

In early June, the parliament of Russia adopted in the first reading a draft law regulating the activities of foreign Internet companies in the country. To operate in Russia, owners of information resources with a daily audience of over 500 000 Russian users will have to open branches or representative offices or establish Russian legal entities that represent the interests of the parent companies and act as the main channel of communication between them and Russian regulators. If a draft law is eventually adopted, the foreign companies will have until 1 January 2022 to comply. The failure to comply will lead to ban on advertising, payments, display in search results, collection and cross-border transfer of personal data.

Freedom of Information in the Balkans: Classified, Rejected, Delayed

Everything as a Service & the Circular Economy